Back in 1990 when Trauger Groh and I coauthored Farms of Tomorrow there were perhaps 60 community supported farms (CSAs) in America. Seven years later, when we returned to the subject to research our book, Farms of Tomorrow Revisited (1998), we found that there had been a phenomenal surge of growth in the movement, and a general deepening of commitment and knowledge among the existing farms.

In the face of the world’s general agricultural and social news, this struck us as wholesome and heartening. 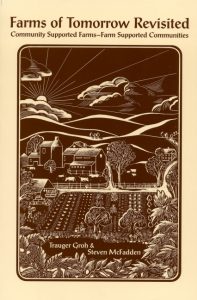 Our first book contained basic essays on new structures for community supported farms which acknowledged that farming is not just a business like any other profit-making business, but a precondition of all human life on earth, and a precondition of all economic activity. As such, farming is everyone’s responsibility, and has likewise to be accessible for everyone. Emerging awareness of this reality was, we felt, steadily inspiring the creation of CSAs: new farms for a new time. The millennium, after all, lay just 10 years ahead.

In addition to essays, Farms of Tomorrow contained case descriptions of community farms to give farmers, and those who aspire to become farmers, practical advice from people who were pioneering the movement, and also models of how the new ideas were being brought to life.

The book was well received because it seemed to meet an imminent need in a world situation where fewer and fewer people participate in farming, which has become largely remote, industrialized, and mineralized, with harshly negative consequences for food quality, life quality, and the environment. Eventually the book was translated into Russian, Korean, and Japanese.

When the original book sold out, the question arose of whether to reprint that version, or whether the experience of nearly seven years justified a new book. We decided for the latter: to maintain the core of the first book, and to add the insights gained over the years.

We named the new book Farms of Tomorrow Revisited, for through it we revisit both the concepts, and the actual farms described in the first book, and are thus able to document their development. To round out our return visits, we added descriptions of many other farms that reveal yet other aspects of the central agricultural, environmental, economic, and social questions. We found a host of new CSAs to choose from, at that time there over 1,200 CSAs in the USA, involving an estimated 100,000 households. (As of 2016, according to the USDA, there may be as many as 12,000 CSAs in the USA. There are many thousands more around the world.)

We wrote five new essays on pertinent themes: the economic, spiritual and legal questions faced by CSA; the development of community; the role of animals; and observations of farm-member families.

We also made an effort to describe the larger context in which CSA arises: global, industrial agriculture. This context will have a continuing impact on the health of the earth, as well as on CSA itself.

Scholar Marcia Ostrom contributed an essay on the emergence of CSA coalitions, and land-trust expert Chuck Matthei authored an invaluable appendix on securing and holding land for the farms. Dozens of other people contributed insights via discussions or shared materials, and yet others offered beautifully written descriptions of their CSAs.

Thus with this wide community support, we were enabled to enrich Farms of Tomorrow Revisited far beyond our original vision, and to produce a volume that we hope will stand in long and provocative service to the next stage of CSA development.

“Much is at stake, and we are the keepers of the Earth.”

As we posited in our first book, and as we reiterate in this new volume, agriculture is the foundation of modern civilization. It will remain so in whatever ages are yet to come. Without a steady supply of clean, life-giving food, we have neither the leisure nor the energy to develop other aspects of life, such as industry, science and art.

Worldwide, our agricultural foundation has been mutating dangerously. Global agricultural giants offer what is to many observers a troublesome vision of the future with the millennium now less than two years away.

We share in the widely held view that our agricultural foundation requires immediate and comprehensive restructuring, that it might wisely support the cultures that rise upon it. But how can farmers and communities even begin to approach this task? Community farms, we have come to see, offer a range of clear, practical and enormously helpful possibilities.

Farms of Tomorrow Revisited exists as a book because of the Biodynamic Association, which supported the research, writing, and publication. Thus, while insights come from all quarters, the new book is rich in both the foundational and emerging insights of biodynamics as articulated by a corps of veteran practitioners.

We hope a wide range of citizens will be informed by these voices. After all, the problems of agriculture and the environment belong not just to a small minority of active farmers; they are the problems of all humanity, and thousands of people are searching for new ways and new solutions.

As we conferred and looked to the universal questions of agriculture and society, and considered the manifold modern dimensions of these questions, we understood quickly that there is no universal solution. There is no simple recipe or remedy for the many challenges we face. But there are positive directions to move in.

Hundreds of farmers and thousands of families are moving in those positive directions through the vehicle of CSA. Yet while the movement’s growth has been phenomenal, it is still very much at the seedling stage of development.

In plain terms, a CSA is a community-based organization of consumers and growers. The consumer households live independently, but agree to provide direct, up-front support for the local growers who produce their food. The growers agree to do their best to provide a sufficient quantity and quality of food to meet the needs and expectations of the consumers. In this way the farms and families form a network of mutual support, whether the community be a region, a neighborhood, a church, a school, or something else.

Within the general framework of CSA there is wide latitude for variation, depending on the resources and desires of the participants. No two community farms are entirely alike.

The experiments in farming described in “Farms of Tomorrow Revisited” represent new social and ecological forms of agriculture which have arisen in recent years while traditional family farms have declined and industrial agriculture has increased. These new farms involve many local families directly in the decisions and labor which produce the vegetables, fruits, milk, and meat they eat.

As we revisited the subject to do research, we learned that some CSAs have risen only to collapse. They failed because of poor growing technique, poor financial management, or poor community building skills. Yet many more community farms succeed than fail, and many important lessons have been learned.

As we conceive of it — and as it is being practiced at a great many farms — CSA is not just another clever, new approach to marketing for farmers. Rather, community farming is about the necessary renewal of agriculture through its healthy linkage with the human community that depends upon farming for survival.

From experience we also see the potential of community farming as the basis for a renewal of the human relationship with the earth.

While CSAs confront a host of challenges and questions, they do work: they feed people, they save energy and money, they take care of the land, they make it possible for people to farm the land on a sensible scale, and they bring networks of independent households back into direct connection with each other and the Earth.
deep agroecology, #deepagroecology

Trauger Groh of Temple, NH has been a farmer in Europe and America for over 40 years. Steven McFadden is director of Chiron Communications.

The book is available for Kindle readers from Amazon.com (see link at top of page), and for all Apple devices through the iTunes and iBook stores.