Legend of the Rainbow Warriors
is dedicated to
Woman with Many Fires
Carolyn Clay Mercer McFadden, Ph.D. (1941-1999)

Legend of the Rainbow Warriors is a journalist’s account of one of the core myths of the Americas, and an electrifying exploration of how that myth is playing out in real time. 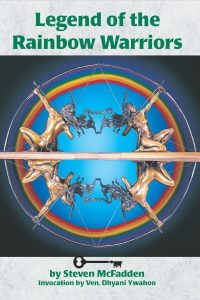 “…The legend of the title is an oral myth told in various forms by the native peoples of “Turtle Island”, or North America. The legend tells of a time when the waters run foul and the air is caustic to breathe. It tells of the House of Mica, commonly taken to mean the UN building…Native leaders were told to knock four times at the door to this House of Mica. And they did…” ~ Review by Elizabeth Routen in Critique magazine

As drawn from dozens of historical accounts, the legend of the rainbow warriors relates that “when the Earth becomes desperately sick, people of all colors and faiths will unite, and rise to face the overwhelming challenges with insight, honesty, caring, sharing, and respect.

This book weaves the myths and contemporary headlines together seamlessly in a work of literary journalism that is adroitly crafted, eye-opening, and soul-inspiring.

“An extraordinary book. We recommend that it be read by all college students and their professors who are concerned about future life on earth.  – Cynthia Knuth

“Mr McFadden has filled this book with so much information from so many points of view you will want to reread it often and keep it handy for reference. I feel its a very valuable read for our turmoil filled lives in the times since Sept 11. Although the prophecies were made many many years ago, they ring truth for those who are living in today’s world! I especially like that this book gives us hope for the future, that we WILL come together as fellow beings on this planet – Rainbow Warriors in the good sense- and bring peace & health to our world at last.” – Reader review on Amazon.com