Tales of the Whirling Rainbow is veteran journalist Steven McFadden’s nonfiction account of some of the key myths and mysteries of the Americas, and an electrifying exploration of how those myths are echoed in real time. McFadden weaves the living myths together seamlessly in a tightly written, fast-moving Soul*Spark book that is authoritative, informative, and soul-resonant. 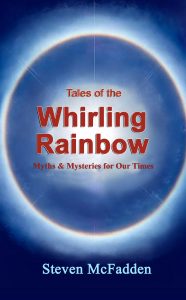 A crucial part of the story commences on June 23, 1995 when traditional wisdom keepers of North America — and a multicultural band of walkers from several continents — began a prophetic journey, walking from First Encounter Beach, Eastham, Massachusetts across the continent to the legendary Western Gate — Point Conception on the Pacific shore. The pilgrimage proceeded for eight months under the dazzling, natural sky sign of the Whirling Rainbow, a key image in the lore since the birth of the white buffalo in 1993.

The new material in the 2nd edition of Tales, based on interviews with traditional Mayan Daykeepers, expands the scope of the ebook by also exploring the key role of the 21,000 pyramids and temples of Mesoamerica. This elaborate network of sacred centers, the Mayan Daykeepers told the author, has a key energetic role to play in keeping the balance as the ‘Sun Awakens,’ Earth Changes intensify, and our human lives attain high velocity.

In this manner, the elders told him, will the different colors and faiths of humanity be moved to heal their web of relationships.

McFadden tells the tales in plain, precise language, creating a quick but absorbing investigation into the mythology of this moment in time.

Tales of the Whirling Rainbow is available in print, and in 10 different eBook and Smartphone formats at Smashwords.com, and for the Kindle ebook reader at Amazon.com (see top of page) as well as for all Apple devices in the iTunes and iBook stores.