My essay on a bit of word play (consilience enhances resilience) – and the words’ relevance for Community Supported Agriculture (CSA) – has been online for some time at Mother Earth News. The linking words in this simple rhyme are worth remembering and applying. 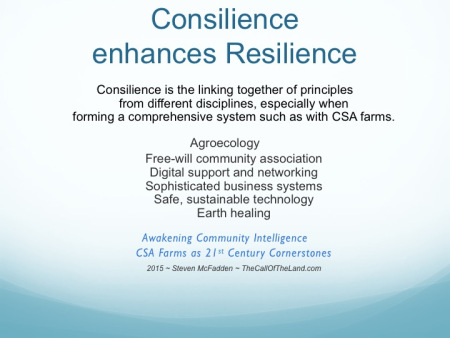 For your consideration:
A meme I created this morning with a short quote from the books I co-authored with Trauger Groh: 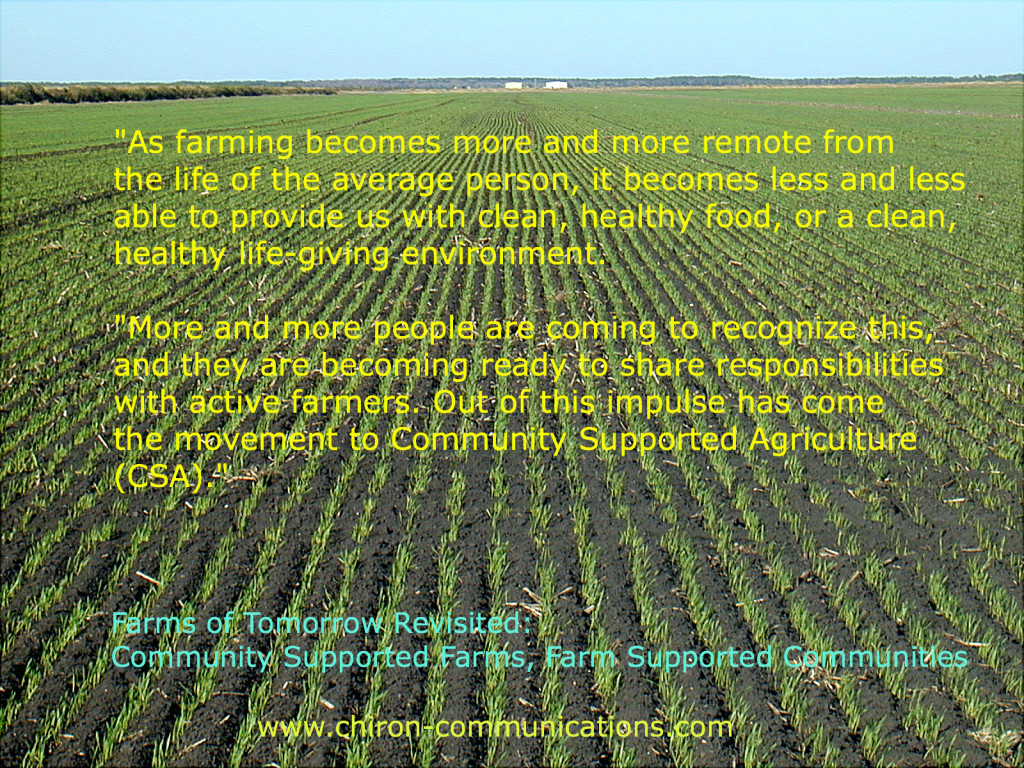 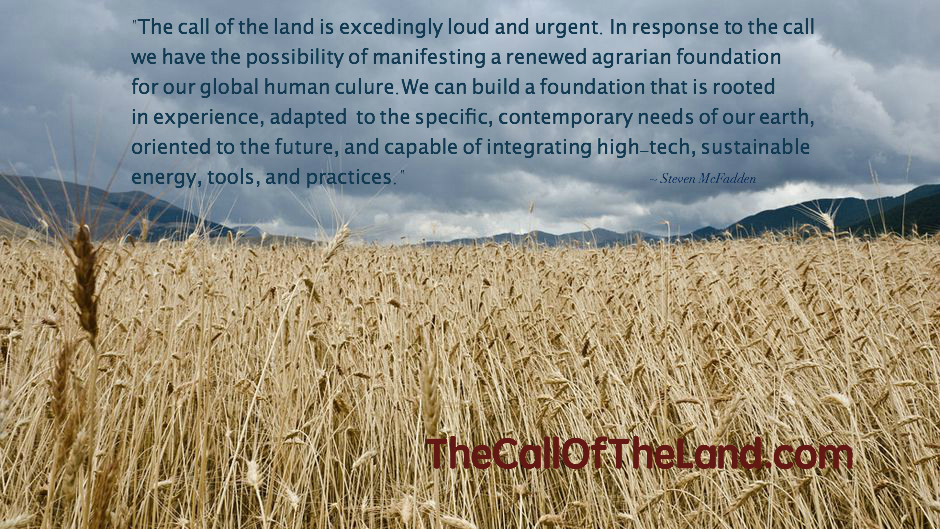 In addition to the blog you are checking out right here on my Chiron Communications website, I maintain another blog entitled The Call of the Land. You’re invited to check it out

The Call of the Land expresses the urgent call of the land as I and a host of other listeners hear it and comprehend it.

In particular The Call of the Land explores positive creative responses to the call that we might have an abundance of clean food and heal the profoundly distressed environment in which we and our children dwell.

Three seed ideas were among the many elements that underlie the actions of the first CSA farmers who in 1985-86 established new ways of farming in America. Those ways have emerged in subsequent seasons to yield as many as 10,000 contemporary community supported farms (CSAs) in cities, suburbs, towns, villages and churches across the land. 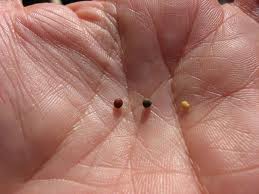 The CSA model has proven to be a natural for adaption and innovation. Many latter-day CSAs, however, have overlooked or bypassed some of the seed ideas as they have established a wide range of variations on the CSA theme. Yet the seeds of the initial CSAs remain viable, perhaps even more so in our era of profound global change. They are freely available to anyone who chooses to cultivate them.

Alice Bennett Groh is part of the founding group for the Temple-Wilton Community Farm, in New Hampshire. In November, 2014 when she spoke at a Peterborough Grange ceremony to honor CSA pioneers, she put her focus on three of the seed ideas that helped community farms to become established in the USA and to grow.

With eloquence and economy of language, she told of how her husband Trauger Markus Groh partnered with Anthony Graham and Lincoln Gieger to cultivate new thinking, and thereby to initiate their highly productive, economically sustainable, and environmentally radiant Biodynamic farm on rocky, rolling hills flanking the Souhegan River…

The rest of the story in follows freely on my blog for The Call of the Land.

On one of my other blogs, The Call of the Land, I’ve just published the following story. To read the rest just follow the link. – Steven M.

No No Nano: My Macro-Objections to
Micro-Machinations of Industrial Processed Food

“To be interested in food but not in food production is clearly absurd.” – Wendell Berry 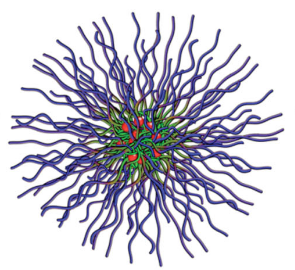 Steadily, stealthily, corporations are driving the goodness of natural life itself from our food, and cleverly – though unwisely – infesting it with dim bits of microscopic material substance that are obscured from human awareness. I object. Wholeheartedly.

Just as synthetic chemicals, manufactured additives, irradiation, and then genetically modified organisms (GMOs) have been corporately imposed upon processed food, now a micro-invasion of nanoparticles is gaining momentum. Patented lab-created nanoparticles are even penetrating the realm of organic food, as the USDA’s organic program chooses to do nothing.

The rest of the story is here.

On December 7, 2011 the USDA’s National Organic Program (NOP) inadvertently violated its own policies and released the name of a Nebraska man who had accurately reported a farmer who was flouting the legally binding organic rules.

In so doing, the NOP unleashed upon Evrett Lunquist a multi-year plague of legal pleadings, and a barnload of  legal expenses to defend himself.

After his name was released in response to a request under the Freedom of Information Act, the man who correctly reported the violations, Biodynamic farmer and part time inspector Evrett Lunquist, was sued for $7.6 million in a Nebraska Court by Paul A. Rosberg, the vengeful farmer who had violated organic rules. Later in the proceedings, International Certification Services was added as a defendant.

After more than 18 months of tedious hearings and a numbing cascade of motions filed by the plaintiff, Lancaster County Judge Paul D. Merritt finally in August 2013 issued a summary judgment dismissing the case.

After the expensive ordeal of defending himself against the allegations unleashed by the NOP’s procedural error, Lunquist, who followed the letter of the law acting as a private citizen when he initially reported the violations, had racked up more than $43,000 in legal expenses. While he received no support or acknowledgement of responsibility from the NOP, he and his family did find generous support from their church and their community. I have previously reported on this case both here and here.

This convoluted case calls into question the ability of the USDA and its National Organic Program (NOP) to stand behind citizens and inspectors who report violations of organic standards. Consequently, the case has sent a palpable chill through America’s network of organic inspectors, and may thereby compromise consumer confidence in the integrity of the USDA’s “Certified Organic” label. Meanwhile, another kind of food certification — Certified Naturally Grown — is emerging….

The rest of this story is on my blog for The Call of the Land. – Steven M.

When I heard about the historically feeble wheat crop of 2013 I began to look around again in the realm of world food production, and once again to connect dots. The sad state of the wheat crop in America’s Central Plains is happening right in my back yard of Nebraska, so that’s what captured my attention again. But the wheat tribulations of the Heartland are but part of far larger story about world food production with far greater implications for local food production.

Yet further rigorous international studies released this week declare that the world is lurching towards an agricultural crisis, with crop production falling behind rates needed in coming decades.

In one case, in a follow up to the United Kingdom’s Climate Change Risk Assessment, a just released official report stated that climate change abroad would have a more immediate effect than climate change at home. Taking the most reasonably optimistic view possible, the report states that the UK is likely to be hit by increasingly volatile prices of many food commodities as the climate is disrupted.

Global production of many key foodstuffs is concentrated in a just few countries. Those countries are likely to suffer increasing episodes of extreme weather. As a consequence, the report states, the biggest threats are shortages of particular items, increased volatility in food prices in general, and constricting protectionist measures over food.

Those same events would, naturally, also impact the economy, food supply, and the cost of food in North America, and elsewhere. Like it or not, we are all one planet. That’s an inescapable fact of life in 2013.

The paper regards climate change not only as fact, but as a multiplier of other threats. “Already price volatility of resources is the new normal,” the authors told BBC News. “This only looks as though it will get worse.”

Meanwhile, arising from the Southern hemisphere, another report warns that famine and its ancient, aggravating companion, war, are becoming an increasingly likely part of Australia’s future as the world struggles to feed itself.

“Clearly, the world faces a looming agricultural crisis, with yield increases insufficient to keep up with projected demands,” according to authors of the report. ”We have no time to waste.”

Shortages and rising prices are creating a double whammy: families struggling to put food on the table, while at the same time governments in the US, Australia and elsewhere are cutting back on food support and other social welfare programs.

In concert with obvious climate concerns is the political-corporate context. America’s Green Shadow Cabinet has just formally opposed the Trans-Pacific Partnership (TPP) as an assault against food sovereignty. According to the Cabinet’s analysis, the trade agreement – now under secret international negotiation — places the profits of multinational companies ahead of the food security needs of individual nations.

Access to food is a basic human right, the Cabinet asserts. The TPP, however, expands the cold, materialistic notion that food is just another commodity subject to financial speculation and exploitation to increase the profits of multinational corporations.

TPP promotes not local, but rather export-oriented food production. In its analysis, the Cabinet found that its passage will increase global hunger and malnutrition, alienate millions from their productive assets and resourcesof land, water, fish, seeds, and technology and, thwart generations of accumulated cultural knowledge.

“Food sovereignty is the right of peoples to control their own food and agriculture…to guarantee the independence and food sovereignty of all of the world’s peoples, it is essential that food is produced though diversified, community based production systems.”

In the context of all these dots of information about world food production, and many others, local food production emerges as not just wise and beneficial for a host of reasons, but also imperative.

In my own life I think not just of my backyard vegetable garden as one wee element of local food production, but also of our local food coop, Open Harvest, which now nearing 40 years of operation. Open Harvest is an active market agent buying food from over 110 organic, sustainable farms ranged around Nebraska’s capital city of Lincoln, and then selling that food at reasonable cost. Just participating in a local food coop as one of thousands of member-owner makes a huge difference in the push to develop local production systems.

There are hundreds of other proven pathways open now for the development of our local food systems, ranging from local farms, CSAs, coops, farmers markets, community kitchens, farm-to-school programs and other community agrarian initiatives. If you are paying attention to world food production, you will recognize that it is time now to be active in local food production, something both wise and increasingly imperative.