Saturday night, January 12, 2002 — two days before his 88th birthday, a man named Cachora, spoke with an audience of about 170 people at the Church of Religious Science in Santa Fe, NM, a city noted for its spiritual history and destiny. 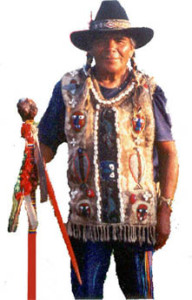 An elder of the Yaqui Indian Nation, and a Nahual (man of power), Cachora has remained a mystery figure for decades. But now he is coming forward from his homeland in the Sonoran Desert of Mexico into the public realm. It is time for this, he says. Chachora says says he is the real man who is portrayed as the enigmatic shaman don Juan in the series of books by Carlos Castaneda: Journey to Ixtlan; The Teachings of Don Juan; and so forth.

With a bright canopy of stars in the night sky, and just hours before the Capricorn New Moon, the Santa Fe teachings began with a Chief’s song offered by Golden Eagle (formerly Standing Elk). He is an Interpreter and Chief for the Yankton Lakota Sioux peoples of South Dakota. Golden Eagle drummed and sang to honor Cachora, and to honor all the Chiefs who serve the Sacred Hoop.

Cachora appeared dark and intense at first, his eyes shaded from the light by a black sombrero. The hat was formed with a humble downturned brim, and crowned with a single golden eagle feather set in the right side of the woven band. He stood straight and strong through the night. Except for when he was speaking, Cachora kept his hands joined together over his solar plexus, above his red tunic, but behind his deerhide vest edged with cowry shells.

Even the shade of a hat could not long conceal the elder. He showed himself to be radiant in health, lithe, open of heart, filled with deep sincerity and hearty humor, and welcoming to all the people. One observer said he seemed “as solid as a beam of mesquite,” a famously tough tree. A human being of attainment, he demonstrated throughout the evening his faith that this potential rests in every human.

Cachora said that he knows 4,000 plants, and how they can be used medicinally to help people heal. He said he spends his time in the mountains, to study and to gather plants, and to teach his apprentices. But recently, Cachora said, he had been guided by Sprit to come forth and teach more widely in the world.

After a few brief introductory remarks, spoken in Spanish and translated to English, Cachora invited any and all questions. “Come on,” he said over and over, “ask.’

Here is a synopsis of Cachora’s translated remarks through the evening, as paraphrased by this reporter: