Right around the start of the year climate scientists began to use a new phrase to talk about the condition of our Earth. Climate emergency, they began to say. In so doing they were giving voice to the hard truth that, in the view of many climatologists, we’ve already tipped the scales past a point of no return. We are living out the early stages of massive, planet-wide climate upheaval.

Climate distortion has been speeding up year after year and the distortions are continuing to accelerate according to NASA. Earth has just endured seven straight months of record-shattering heat. Thus, in 2016 we are on track to experience the largest increase ever in global temperature.

Just before climate scientists began uttering the phrase “climate emergency,” the prestigious international insurance company, Lloyd’s of London, issued a formal report titled Food System Shock. The report spoke bluntly of acute disruptions to the global food supply. Meanwhile, 30 of the world’s largest insurance companies, known for their conservative approach in all matters, established a formal coalition (SmarterSafer) to sound the alarm about our extreme circumstances. Climate chaos is happening, and it’s going to be increasingly costly and perilous for everyone.

There is an urgent need to reckon with the impact to our environment and our food, an ominous message being articulated by many learned groups, including The Consultative Group on International Agricultural Research (CGIAR).

It’s dangerous to remain distracted or asleep about these hard realities. It’s past time to wake up. We are well underway in an era of profound changes in our climate and economics as well as our health and social well-being.

With respect to this, I’m sounding a call for the establishment of hundreds of thousands more sustainable farms on the model of Community Supported Agriculture (CSA). There is much to be gained for everyone.

Farmers cannot do this alone, especially not if CSA is pursued as some kind of a “marketing model.”  To thrive in our extreme era, CSA cannot be downgraded to a competitive selling system dependent on “customers.”  CSA was never intended for that purpose. CSA embodies the potential for a new way of life upon the land for farm, farmers and supporting community. The economics are associative, rather than competitive or exploitive. Some progress has been made in that direction, and much more is possible.

The wide array of community based initiatives to increase local food production that have emerged over the last 30 years (ranging from farm-to-school lunch programs and farmer’s markets, to reward programs for restaurants that buy food locally, and beyond) are all of tremendous value and importance.

But in my view, among all the initiatives and innovations, CSA stands out as a promising model for many millions of people and hundreds of thousands of communities. It’s a way for people to respond intelligently and strategically to our intensifying climate dilemma. CSA does not leave the great challenges of our era in the lap of farmers alone. At its intended potential, CSA draws upon the strength, intelligence and resources of all the people who of their free-will choice depend upon the farm.

Over the last three decades hundreds of thousands of people in the US and all parts of the world (URGENCI) have come to recognize in CSA a vehicle for approaching land, food, labor, environment, and community in a healthier way. The movement has made some noteworthy progress. Much more is necessary. Now we need many millions more to awaken to similar basic realizations about climate problems and CSA potentials.

CSAs are a righteous response to our unfolding climate emergency. They are resilient, egalitarian, and a fundamentally healthy foundation for the high-speed, high-tech digital culture emerging so dynamically in our world. CSAs have an established track record in America, Canada, Europe, Japan and around the world from east to west. The model has been tested and refined. It’s not government, and it’s not corporate. It’s a choice and a free will association with a farm and a farmer. Thousands of people have applied their intelligence and experience to create and cultivate the CSA model over the last 30 years.

Right now we need hundreds of thousands more communities to see the need and the potential, and to swiftly establish CSA farms.

Right now one-third of all human-caused greenhouse-gas emissions come from industrial agriculture, as reported in Nature, the international weekly journal of science. Reducing agriculture’s carbon footprint is crucial to limiting climate change. CSA farms employ the principles of agroecology, which provides a robust set of solutions to environmental pressures and crises. Virtually all CSA farms are either organic or biodynamic. They sequester greenhouse gases, and help stabilize the earth’s climate. Hundreds of thousands of CSA farms around the world could help to make a difference.

In our era with increasing shadows of climate, environmental and social complications, it’s time to expand exponentially the CSA vision and reality. The opportunity is before us to establish hundreds of thousands of CSA farms in nations around the world, and to thereby employ a proven, egalitarian model to address our radically changing circumstances.

Community farms, in their many variations, can be key models for shifting our reality toward healthy. 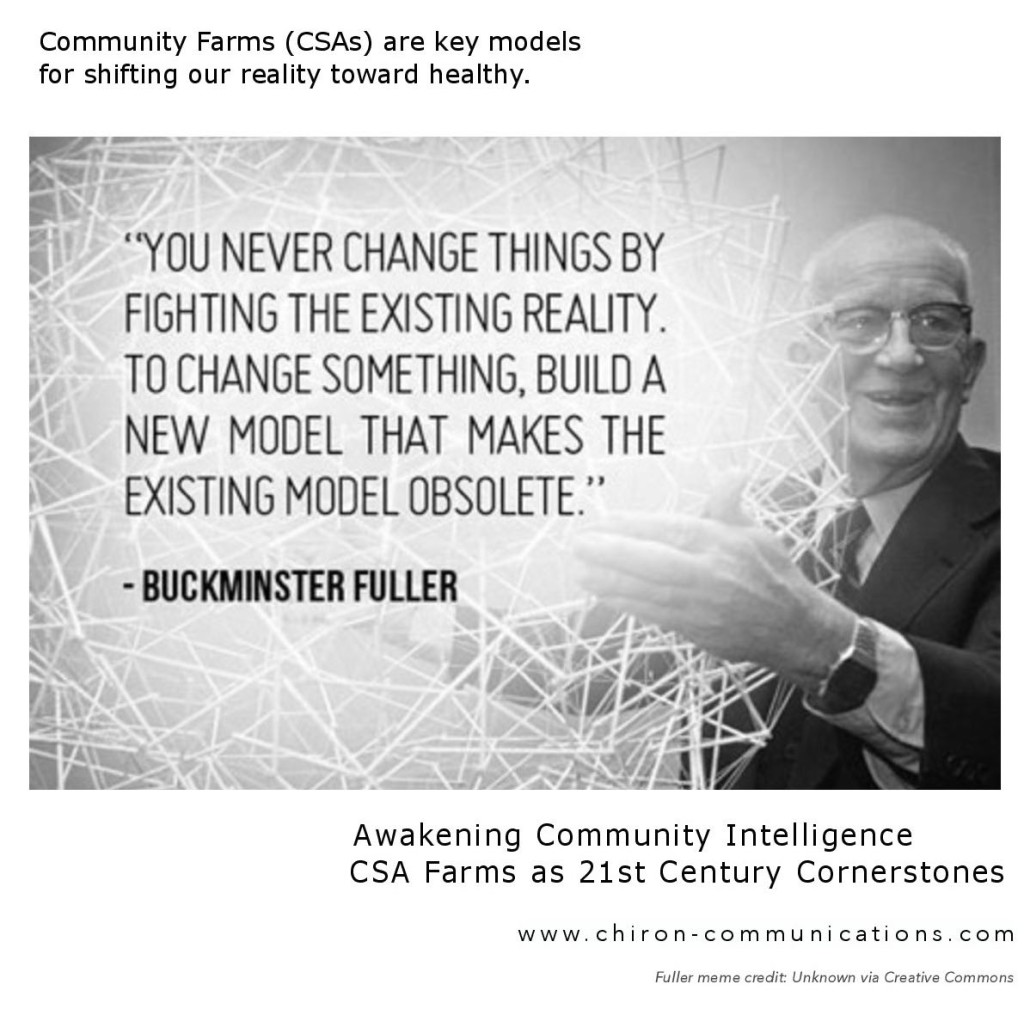