Once oft’ told, the story that I came to know as the legend of the rainbow warriors has in recent years been drowned in the ceaseless tsunami of online information. The tale has slipped beneath the digital flood at a time when its vision is sorely needed. 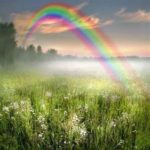 It’s time to invoke a great whirling surge of Nilch’i Diyin (Holy Wind) into the story, and thereby help it rise back to the surface

The rainbow legend has been glimpsed in vision and then articulated in myriad ways for hundreds of years in various parts of the world, often as well on Turtle Island (North America). The story is told from a spectrum of perspectives, given life by storytellers using music, words, art and dance to animate the tale in their own creative way.

In brief, the legend relates that when the world becomes desperately dirty, sick and chaotic with divisive hate agents at work in realms of race and religion, many people will recognize that they are destroying themselves and the earth they depend upon for survival. With spiritual insight and support, the rainbow warriors — people of all colors, cultures and spiritual outlooks — will respond creatively with insight, intelligence, honesty, caring, sharing and respect. Through personal example and positive, peaceful means, this rainbow network of awakened souls will establish a golden era of peace.

Often mocked as pixie-dust fantasy or outright condemned as fakelore rather than folklore, the rainbow legend persists because it has deep roots, and because it echoes a venerable theme in storytelling: paradise lost, paradise regained. We are squandering paradise in our modern world. Is it therefore surprising that there should arise hopeful tales of a time when a better world may be attained? 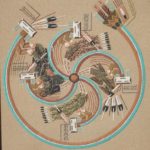 Mythologist Joseph Campbell noted that a society that does not have a myth to support it and give it coherence goes into dissolution. “That is what’s happening to us.” Campbell wrote in Transformations of Myth Through Time. And that, I feel, is why it is worthwhile to tell the rainbow tales again in yet another way, to contribute a picture of what I regard as a coherent and positive mythic dimension of understanding for our times.

For 200 years or more a dominant myth in the developing world has been an interpretation of the American Dream suggesting that most people can attain wealth by taking from the land and sea at an industrial scale with a mechanical consciousness, and that happiness will follow from profit. This myth is relentlessly reinforced by advertising images. Yet the unbridled pursuit of these versions of the myth, often by people deep in sleep, has plunged us into a nightmare of environmental devastation, economic upheaval, ethical bankruptcy, and cultural confusion.

As I write more than 40 wars are raging around our world, and another 200 or more armed conflicts are underway. The US National Oceanic and Atmospheric Administration (NOAA) has reported that “the weather is noticeably more chaotic.” Our world is home to more than 7.5 billion human beings. Well over one billion of those human beings are hungry or starving.

In the midst of these stark realities, various myths or frames are conjured via the broadcast voices of demagogues, and the bloody, fear-provoking images so common in movies, music and computer games — the fear-driven myth that the world is hate-filled and chaotic beyond redemption. For many people, in the absence of something more wholesome, such barren and toxic visions become embedded in the psyche as working myths, albeit often unconsciously. Yet the rainbow tales are as possible as the visions of a global death spiral. The enactment of our future is up to us.

The Environment of the Soul
I’ve encountered a spectrum of rainbow myths, beginning in the 1970s when I read the book Warriors of the Rainbow, by William Willoya and Vinson Brown, and then in dozens of other readings and listenings. As is the custom among storytellers and as a lifelong journalist, I passed on the tales I heard later in my own words at gatherings, and in my writing. 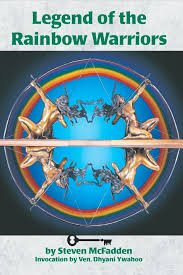 My 1992 book Legend of the Rainbow Warriors was an exercise in creative nonfiction. The book relates many of the ancient versions of the rainbow warriors legend, uniting a chorus of voices. It cites seers such as Black Elk and Crazy Horse of the Lakota, Quetzalcoatl of the Toltec, Weetucks of the Wampanoag, Plenty Coups of the Crow, White Buffalo Calf Woman of the Plains, Eyes of Fire of the Cree, Ku’Kulkan, Quetzalcoatl and Montezuma of the of the south direction, the Peacemaker of the Haudenosaunee, Padmasambhava of Tibet, and Alinta of Australia. I included in my book some of the teachings that I’d absorbed over the years from Grandfather William Commanda, Don Estevan Tamayo, Arvol Looking Horse, Martin Gashweseoma and Thomas Banyacya, Oh Shinnah Fastwolf, Slow Turtle, Sun Bear, Reuben Snake, Cachora, Grandmother Doris Minkler, Manitonquat, Don Jose Matsuwa, Dona Josepha Medrano, and others. Though they lived at different times and in different places, they shared a sense of what would unfold.

Legend of the Rainbow Warriors was my effort as a journalist to create an account of one of the core myths of the Americas, and to also explore of how that myth might be playing out in real time.

Do the voices and the rainbow tales add up to something that is ultimately, absolutely verifiably true? That is for you, the reader, to consider and to create. Mythologist Joseph Campbell looked at it this way: “A myth is something that has never happened, but that is happening all the time.” 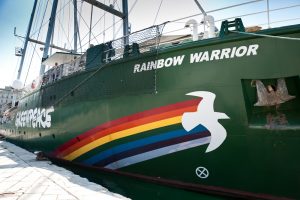 Those devoted solely to measurable evidence run the risk of missing the point altogether. The rainbow tales are both myth and mystery. Myth creates the opportunity of inspiration, a chance to become aware of something the intellect has not the scope to grasp: access to “the supersensensible environment of the soul” as poet William Butler Yeats expressed it. To this the myth adds a note of mystery: spiritual truths knowable not through reason alone, rather but through contemplation or revelation.

My friend the late Leon Secatero, To’hajiilee Chapter of the Navajo Nation, explained to me that he appreciated these teachings not as prophecies, but rather as knowings.

Leon’s friend and colleague, Don Alejandro Cirilo Perez of Guatemala, elaborated on that insight. Longtime President of the Maya Elders Council and a initiated Daykeeper, Don Alejandro told me: “There is truth in the teachings about the rainbow and the rainbow people. People from all of the Americas will unite with people from all the other nations, and they will realize that we are all family, brothers and sisters. This is not my personal vision, but a cosmic vision presented by all the elders – a vision that we all share.”

A Kitchen Table Telling
I’ve heard 40 or more tellings of rainbow mythology over the decades. On the afternoon of May 13, 2006, I heard another convincing rendition while traveling with my friends Stephen Clarke, and Carlos White Eagle. We were seated at the kitchen table in a rustic ranch house in Haystack, New Mexico, visiting with Navajo Grandfather Martin Martinez, his wife Janice, and their daughter, Kay. 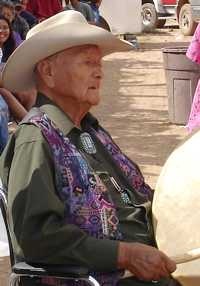 Grandfather, in his 90’s and nearing his transition on the Beauty Way, had life experience as a rancher, a rodeo rider, a Code Talker in World War II, and for many long, honorable years as a community leader, a traditional Singer, and the ceremonial keeper of Tzoodzil — the Blue Bead or Turquoise Mountain, now called Mount Taylor. Rising majestically under the blue skies of New Mexico, Tzoodzil is the South Mountain among the Four Holy Mountains that mark the Four Corners of Turtle Island (North America)

As we sat around the kitchen table in the family ranch house, Grandfather told us a story. He spoke in Navajo, and his daughter Kay translated. We smoked a pipe in a sacred manner, and Grandfather said he could remember long ago when he was a boy hearing some of the Medicine elders talk. The Medicine elders told him that during his lifetime there would come a dark era when many problems would arise on Earth. For many people it would seem as though there was no hope.

Basic Wisdom
An underlying premise of the rainbow legends is that there is a basic wisdom that can help solve the world’s problems. This wisdom does not belong to any one race, religion or culture, but is a tradition of caring, sharing, and sacred light and sound that has existed throughout human experience and that has been expressed by many human beings, certainly including the saints spoken of in the world’s formal spiritual institutions, as well as thousands of other human beings of less formal renown. 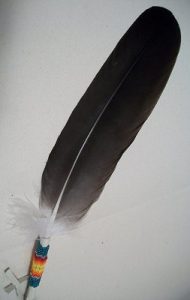 We are in a time when many millions – actually billions – of people can and are by circumstances called to give the archetype expression in their lives. Thus the challenge is laid down before us all: live up to the promise.

In light of the legend, my understanding is that rainbow people choose themselves and then strive to live with exalted physical, moral and ethical courage, appreciating that the problems and weapons of the world have been made by the human mind, thus they can be unmade. Rainbow warriors and rainbow walkers need to cultivate compassion, a fundamental attribute of human beings, which will gift them with energy and the power to take action. They will also have to develop insight and intelligence, which will guide them to apply the power of compassion via skillful means.

Rainbow warriors and walkers do no harm, inflict no pain, and cause no suffering. They work to set things right by good example. Their lives are about having integrity, being brave, and standing forthrightly but peacefully for all that supports life. Their quest is for safety, sanity, and respect. According to the legend, ultimately they are triumphant. So the story has been told to me. So in my  way I tell it to you.