“Whoever controls the seeds in a culture is going to control life.”
~ Emigdio Ballón, Tesuque Pueblo Farm

My notes from the impressive Mountain West Seed Summit in Santa Fe, New Mexico over March 3-4, 2017 – a gathering  of seed savers, and people representing seed hubs and seed companies:

Belle Starr, co-founder of the hosting organization, the Rocky Mountain Seed Alliance, an organization started just three years ago: “We are working to build strong food hubs around the country. The local food movement is huge and growing. But how many are saving seeds? That part is missing.

“What is our duty? Diversity. I hope the thing we carry out of this summit is passion to empower and inspire. That’s how we are going to get diversity. This has to be a grassroots movement. The more people who save seeds, the more resilient the system we create…We hope this will go on for generations.”

Emigdio Ballón, a Quechua native from Bolivia, Agricultural Director for the Pueblo of Tesuque, NM: “The seeds are calling us. They are asking us to help them continue their evolution as they help ours.

Emigdio Ballon (R) speaks with his fellow farmers outside the seed bank at Tesuque Pueblo Farm.

“It’s very difficult for the seeds now. In 2011 we talked about seed security and its relation to food security. That’s when we started our seed bank to protect the seeds handed down to us from time immemorial. Now we are talking also about climate change, and how that is impacting us. How can the seeds sustain us, and our unborn? They need to be protected because of the corporations polluting the earth, and claiming patents over nature. Indigenous people care. Indigenous peoples are protectors.”

Clayton Brascoupe, a Mohawk/Anishnabeg farmer, founder of the Traditional Native America Farmers Association: “What is a seed? Seed is life, mother, embryo, treasure, potential, possibility, relative, our child. All of those things. There is a fundamental, essential relationship that we have.

“We’ve been going along side by side with each other for thousands of years, and now we are in this present generation. We have a treaty, a covenant with the seeds. The seeds are a part of who we are. We have to take care of our relatives, the seeds, and they in turn will take care of us.

“Seeds are the first link in the food chain, and this link is now under threat. Our responsibility is to preserve them for forthcoming generations.”

In remarks to initiate day 2 of the Seed Summit, Bill McDorman, director of the Rocky Mountain Seed Alliance spoke about the importance of developing Seed Hubs in parallel with Food Hubs and other local farm and food initiatives. “There’s a real need globally for many more regional operations. Seeds are the foundation not just of our food system, but of civilization itself…This can save us. Regional organizations are the key.”

Andrew Kimbrell, founder and director of the Center for Food Safety, gave a riveting keynote presentation. He began by mentioning that with the financial backing and technical expertise of entrepreneurs from Silicon Valley, the Center is about to launch an international online network for seed savers. 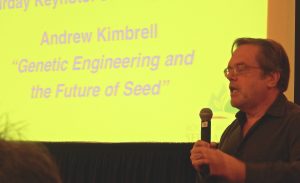 He placed this forthcoming network, and the importance of seed saving, in the context of three pending corporate mergers: Bayer-Monsanto, Dupont-Dow, and ChemChina-Syngenta. These mergers, likely to get green-lighted by the Trump-Republican Administration, will place over 60% of the world’s remaining seeds in the corporate control of just three companies. They dominate.

All these multinational corporations are intent on continuing to patent life forms, and to sell allied chemicals as essential, expensive, and polluting inputs to the industrial agriculture system.

The accelerating pace of global climate change and corporate seed and chemical control underscore the imperative need to establish non-corporate seed-saving networks, he said. “We don’t know what seeds we are going to need. But the network will be a key. These are dark times.”

Drawing from some of the material in the well-known book he edited (Fatal Harvest: The Tragedy of Industrial Agriculture) he outlined a history of seeds and agriculture in the USA. “Remember the robber barons of the gilded age?” he asked. “We are in the second phase of that.” A century ago the robber barons made their fortunes in railroads, coal, steel, and oil. As succeeding generations of billionaire barons sought further pots of gold, their gaze fixed upon agriculture.

With hybrid plants, poison chemicals (biocides) and patents, robber barons and their corporations over time mutated the meaning and the reality of seeds. Instead of being a commons that united people in ancient and sacred community traditions of caring for a foundational source of life, seeds became a commercial commodity.

Farmers became trapped on technology treadmills: functionaries basically serving as corporate pass-through operations for commercial seeds, chemicals, machinery, oil and gas. Corporations took culture out of agriculture, and substituted industry. For farmers, indebtedness ruled. Whereas just over a century ago as many as 40% of the population was involved in caring for the land and the seed that everything depends upon, only about 1% of the population now has this connection.

Consider where we are now, he said. Via monoculture and intensive chemical use, we continue to deaden and to lose soil. The nitrogen fertilizer of industrial ag leaches out to waterways, creating massive dead zones in our oceans. We’ve lost 90% of our seed diversity. The Center for Food Safety estimates that 35 to 45 percent of greenhouse gases are generated from industrial ag. Thus, the essential elements of farms and food (soil, water, seeds, industrial livestock, etc.) have become zombies. 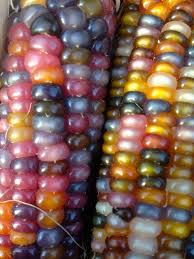 “We are the future. Sometimes we look at these dominant forces, and wonder how can we possibly overcome? But the zombie system is already dead.”

Corporations used to wallow in hubris, believing that nature was no match for biotechnology. But it turns out that biotech is no match for nature. The idea that you are going to control the traits of living things is false.

The answer Kimbrell argued, is for our economy to transform into a wholly owned subsidiary of ecology. “We can only use things to the extent that they regenerate themselves.” We have to go local, biodiverse, humane, and socially just, he said.

Fundamental to all of this transformation is seed. None of it makes sense without seed. Seed is the center that we need.

While stating that he sees organics as a floor for the future of agriculture, he reminded the audience that it’s under attack. The Freedom Caucus (about 30 hard-right Republican members of Congress) has targeted the National Organic Program for destruction.

In response to a question from the audience, Kimbrell commented on the upcoming 2018 Farm Bill. “If Dante were alive today,” he said, “The Inferno would be about the farm bill.” He said we need to get environmental groups together with farm groups right now, in 2017. “Unless we get ahead of the game,” he commented, “we are lost.”

Three times during his talk Kimbrell quoted the late Rachel Carson, author of Silent Spring. One example: “I believe natural beauty has a necessary place in the spiritual development of any individual or any society. I believe that whenever we substitute something man-made and artificial for a natural feature of the earth, we have retarded some part of man’s spiritual growth.”

Echoing this insight toward the end of his talk as an encouragement to seed savers and to others working to build a just, healthy and equitable farm and food system, Kimbrell said: “We face the spiritual challenge of moving from a culture of death to a culture of life.”