Dear Reiki friends,
I recently received the email pasted below from Kathelin Gray, a dear friend with a base here in Santa Fe.

Her father, John Harvey Gray, is one of my Reiki teachers, and her mother, Beth Gray, has been a well-known and well-loved Reiki teacher and spiritual adviser for many long years. She died this week on May 13 at age 90.

I felt many people would be interested to know about Beth and the beautiful legacy of her spiritual life. 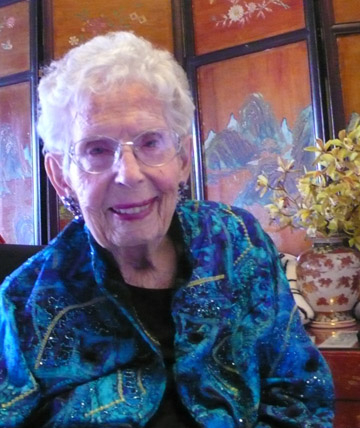 Reiki Master Beth Gray passed away peacefully at 1:48 pm PST, May 13, 2008. She was in her home in San Carlos, California, in the arms of her daughter, and listening to the voice of her son speaking to her by telephone.

The eldest of seven children, Beth was born in Chicago on April 11, 1918, to an immigrant father and mother, a Southern belle from Kentucky. Beth was a gifted violinist as a girl and was concertmaster of the Chicago Women’s Orchestra.

She left home at 18, giving up the violin to study laboratory medicine at Stanford University. She wanted to devote herself to finding healing and spiritual modalities that she felt must exist but at that time were not known in the West.

These interests brought her together with her husband, Dartmouth graduate John Harvey Gray, and they married as World War II ended, subsequently settling in Woodside, California.

In the early ’70’s, Beth founded the Trinity Metaphysical Center in Redwood City. As pastor, she developed it as a pioneering center for interchange of spiritual teachings from around the world, and alternative healing activities.

At Trinity, she brought Hawayo Takata to teach, thereby launching what has become a social movement in energy healing. Trinity became the first Reiki center in the United States.

Takata was a Hawaiian-born Master of Japanese descent, who transmitted the Reiki teaching to the U.S. Beth and her husband John Harvey both realized that they had found the healing wisdom they had sought for so long, and they became two of the first Reiki Masters initiated by Takata. From that time on, both of them devoted their lives to the teaching and practice of Reiki.

Their son, John Harvey Gray III also studied under Takata and was later made a master by his father. Takata stayed with the Grays in their home and was also ordained as a minister. John Harvey and Beth later divorced, and taught separately, though they remained lifelong friends and spiritual partners.

Beth closed Trinity in order to devote herself to traveling in the U.S. and worldwide. She introduced Reiki healing to the continent of Australia, where her students included Denise Crundell and Barbara MacGregor.

Aided by her natural charisma, beauty, and wit, Beth brought the method and practice of the Usui lineage of Reiki to thousands and thousands of people. She spoke to large gatherings, appeared on radio and television shows, at the same time carefully transmitting the scrupulous Reiki healing methods to small groups. Beth carefully articulated and demonstrated what is considered to be one of the great healing traditions.

She also brought groups of students to the Philippines to investigate and experience the ‘psychic surgeons’ of that country. Beth and her husband John Harvey both had transformative experiences in the presence of those healers.

In 1993 just before her 75th birthday, a stroke ended her extensive travel and public teachings. The doctors at the time of her stroke said she would survive no more than a couple of years, but she enjoyed a full 15 years more of life. To Beth, surviving her stroke signified that her outer spiritual teaching time was over, and it was time to concentrate on meditation to refine her inner spiritual life, and perfect her already well-developed psychic gifts. Many people wrote that she appeared to them in dreams and through ‘distance’ healing. She remained very social, entertaining visitors, and, in the San Francisco Bay Area where she had lived her entire adult life, she lit up every room she entered.

Shortly before her 90th birthday on April 11, 2008, she understood that soon after her birthday, she would make her transition, liberated in another form to heal our planet in crisis.

Her friend and former husband John Harvey Gray is the longest-practicing Reiki Master in the United States. He lives in Rindge, New Hampshire, and continues to actively teach with his second wife Lourdes Gray at the John Harvey Gray Center for Reiki Healing (http://learnreiki.org). John Harvey’s birthday is a year and a day before Beth’s, on April 10, 1917. He is 91 years old.

For messages or to send stories and reminiscences of Beth Gray, please email her daughter at kathelin@yahoo.com. on cellphone +1 505 310 8428

Beth’s daughter Kathelin Gray has developed a website devoted to Beth and her teachings at www.bethgray.org.

My name is Kathelin Gray, and I am the daughter of Reiki Masters Beth Gray and John Harvey Gray. It is over thirty years since Takata taught the Reiki method to my parents and others, and the first Reiki Center in the United States was founded by my mother, Trinity Metaphysical Center.

Mother retired as an active teacher after a stroke in 1993, curtailed her very busy travel schedule, a few days before her seventy-fifth birthday. Typically, she embraced that event as a blessing and continued her work channeling distant healing and meditating. To have been in her presence is to see a fully realized and beautiful soul who emanates joy. She derived great pleasure in reading letters from former students, and students-of-students, and in receiving visitors from all over the world, all living testaments to the thousands of people whose lives have changed through Reiki.

Her 90th birthday this year marked the end of her life’s mission. She made her transition to the Unknown Adventure on May 13, 2008 at 1:48 PM PST.

MESSAGE FROM BETH GRAY
These slightly updated notes were originally published in the Reiki News, on the occasion of Beth Greyâ€™s 85th birthday 5 years ago:

â€œGreetings to all of you!

â€œIn this difficult time in the world, it is my prayer and wish that we all may remember that we are made of and by Universal Love. May all practitioners of energy healing flow with peace and love. Let us issue a silent meditation to love and truth and peace and beauty that they make themselves at home in our hearts and in our world. Let us release all the troubles that seem to run rampant like a plague, and realize they are caused by the ego, which is an illusion.

â€œMake a decision that you will initiate and continue with the process of forgiveness, and that anger, greed, envy and violence are outmoded and ineffective methods of being and action. Until one is committed, there is hesitancy; the moment one definitely commits oneself, providence moves too, and a whole stream of events issues from the decision which no man could have dreamt. But this process begins in your dream. So dream the dream of your heart, and begin to live it, for boldness has genius and power and magic.â€

Essay: A tribute to Beth Gray, My Teacherâ€™s Teacher
http://www.compassionatedragon.com/reiki_beth_gray.html

My father John Harvey continues to actively teach Reiki with his second wife Lourdes. They remained
in close touch with Mother, as their loving friendship endured. John and Lourdes may be contacted through http://learnreiki.org/

P.S. These photos were taken during my motherâ€™s birthday celebrations this year (2008). I have also attached an image of one of her certificates from Hawaya Takata, the third degree.