At this point most of us need look no further than outside our windows to see that climate change is upon us. For me in New Mexico, the alarming sight of a neighborhood emergency out the window came last summer in late July. That’s when a “thousand-year storm” ripped up our yard, overflowed the arroyos, inundated the basement of Santa Fe’s city hall, and washed-out streets around the region. The storm swamped gardens and farm plots aplenty.

From polar vortexes and churning tornados, to the relentless string of hurricanes, floods, and forest conflagrations, the earth changes of climate chaos are raging. To ignore this rampant reality, and to do nothing about it, is to invite peril.

As NASA and NOAA scientists put it this past week, “We’re no longer talking about a situation where global warming is something in the future. It’s here. It’s now.”

In this context, food production is increasingly susceptible to extreme climate and weather events, according to researchers publishing in the journal Nature Sustainability  (January, 2019). They report that the intensifying scale of weather disasters worldwide is related to climate change, and is having a steady, unsettling impact on global food systems and markets. Extreme events are slamming home repeatedly on land and sea.

Consider the news from just the last week:

Five Straight Record-breaking Hot Years – Scientists at NASA reported that the Earth’s average surface temperature in 2018 was the fourth highest in nearly 140 years of record-keeping and a continuation of an unmistakable warming trend. The data confirms the fact that the five warmest years in recorded history have been the last five. Further, 18 of the 19 warmest years have occurred since 2001.

Gigantic Hole in Antarctica – A colossal cavity 2/3 the size of Manhattan has been discovered growing in Thwaites Glacier in West Antarctica, signaling rapid ice decay. Shocking the scientists who discovered it, the huge hole was found growing at an “explosive rate” according to NASA’s Jet Propulsion Laboratory.

Ice Shelf Tearing Apart – Also in Antarctica, the Brunt Ice Shelf is tearing itself apart and could create an iceberg the size of Delaware. Scientists say that will happen soon.

Himalayas Melting – At least a third of the ice in the Himalayas and the Hindu Kush will thaw this century as temperatures rise, disrupting river flows vital for growing crops from China to India, for about 1.65 billion human beings.

URGENT WAKE UP CALL
In recognition of the reality that climate change is underway now and already affecting billions of people across the globe, the Club of Rome has sounded an “urgent wake up call,” and published a global Climate Emergency Plan.

Based on their studies, the Club of Rome recognizes that climate change is the most pressing global challenge of our era, a force that constitutes an existential threat to humanity. To avoid further collapse of environmental, economic, social, and political systems, their plan sets out 10 priority actions, such as transforming energy systems, scaling-up technology, and reckoning with overpopulation. Finally, at number 8 on their list, they sound a call for acceleration of “regenerative land use policies.” For farms and food, the principal way they recommend for responding to their urgent call is to “adopt the Food and Agriculture Organization of the United Nations’ (FAO) recommendations for 100% Climate Smart Agriculture  (CSA).” That is a critically weak, inadequate, and flawed recommendation.

According to the FAO, climate-smart agriculture is an approach that helps to reorient agriculture to support development and ensure food security in a changing climate. This is an approach widely embraced by multinational industrial ag and chemical corporations, but widely criticized otherwise. In September 2015, for example, more than 350 civil society organizations called on national and international decision makers to reject “the dangerous rhetoric of climate smart agriculture.”

While corporate CSA sounds promising, the civil society groups argued, it’s actually greenwashing. Corporate CSA lacks social and environmental safeguards, and fails to prioritize farmers’ voices, knowledge, and rights. It should not be confused with agroecology, which is a global movement toward clean, holistic agriculture, based on principles of ecology, food security, food sovereignty, and food justice.

Long before corporate “CSA” co-opted the acronym, CSA was well-known in agricultural circles as standing for Community Supported Agriculture. That CSA – the original CSA – is but one example of real agroecology. Even in the face of multinational corporate dominance, true agroecological initiatives are continuing to proliferate around the world because strengthening resilience against food shocks by enhancing local food security is not just common sense, it is an imperative requirement of our era.

DEEPLY ROOTED SOUL MOVEMENT
Right now in America and around the world millions of people are actively pursuing many thousands of agroecological pathways forward, from food coops and real CSA farms, to the manifold permutations of urban agriculture, Transition Towns, and countless other creative endeavors to build clean and just local economies, and clean, just local food systems. In the light of climate change realities, millions more of these initiatives are required.

As Gary Nabhan expressed it in the context of his new book Food from the Radical Center, the good food movement is not just an idea. It’s a “deeply rooted soul force at work from coast to coast and north to south.” The Good Food-Local Food movement – whether locally anchored in a CSA, a co-op, a farmers market, or some other form – is civic responsibility driven by acutely realistic economic, environmental, and health concerns.

These agroecological initiatives are some of the pathways I strove to map out in earlier books, such as The Call of the Land, and Awakening Community Intelligence: CSA Farms as 21st Century Cornerstones.

In the first book on the original CSA, Farms of Tomorrow, my co-author Trauger Groh made an eloquent argument. Farming, he reasoned, is not just a business like any other profit-making business, but rather a precondition of all human life on earth, and thus a precondition of all economic activity. “As such,” we emphasized in the book, “farming is everyone’s responsibility, and has likewise to be accessible for everyone. The problems of agriculture and the environment belong not just to farmers, but are the common problems of all people.”

That’s the call to action that I, and thousands of other people, are sounding in the hope that many millions of people, even billions of people, will see and will recognize what is happening, and then take swift, powerful, intelligent, and strategic action through households, communities, and nations to build food security and thereby also help mitigate the unfolding pattern of climate change. 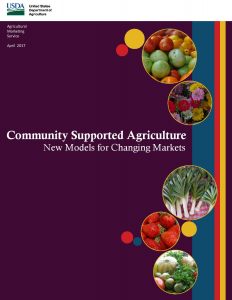 For anyone interested in local food or food security, the report is worthwhile reading: well researched and written, instructive, and enriched with informative case histories.

But the report moves me to articulate once again what I consider to be an essential point: CSA was not developed as a marketing strategy. Obviously, some companies and farms choose to approach CSA that way, as is their right. Equally obvious, there is of necessity somewhat of a marketing element involved in most CSAs.

But to assert the idea that CSA is a marketing strategy – as the USDA and many land grant institutions routinely do – is to alter the core ideas of CSA. Even though “business model” and “marketing strategy” have become widespread approaches to CSA, in my view emphasizing those concepts shifts the focus from where it needs to be.

CSA farms will likely always be at a disadvantage in the “market” in the realms of price, consumer choice, and convenience. But that’s not what the CSA model was developed to address. CSA was developed by a wide community of people as a way to renew our relationship with the land, with the people who grow our food, and with each other.

Asserting this view now, in light of the trend to define or frame CSA as a business model, will likely be regarded by some people as either anachronistic, or as dewy-eyed idealism. I’m among those who think otherwise. I think it’s essential to keep the focus and the framing of CSA on the core ideas. CSA is not structured to be part of a competitive commercial marketplace, where market forces will always be the determining factor, rather than farm needs, farmer needs, and community needs. It is, after all, not just community supported agriculture, but also agriculture supported communities.

The steady morphing of CSA from a farm-and-community collaboration to a marketing strategy is, in my view and the view of others, off the mark and ultimately inadequate to the challenges of intensifying political and climate turbulence. Something different is required, and that difference has been the ideal and overlighting spirit of CSA: communities and farmers working together on the land to create new ways of living in relation with each other and the natural world which we all depend upon for survival. Ideals, of course, exist in the realm of the mind, and in practice the best we can do is strive toward them.

To survive and perhaps prosper in an era of climate and political turbulence, CSA needs to remain the realm of mutually beneficial community association. That’s a fundamental CSA concept that gets sidelined or obscured when CSA is treated as a marketing strategy.

Some of this understanding has found expression in the Community CSA Charter that was developed earlier this year by an ad hoc community initiated by CSA author Elizabeth Henderson.

In a community e-mail discussion of various charter drafts, Anthony Graham (a CSA farmer for 30 years at the Temple-Wilton Community Farm in NH) made this point eloquently: “Our farm members are just that – members who support the farm. We make it clear to them from the start that they are supporting a farm and receiving the produce as a consequence of that support. They are never seen as or referred to as customers and especially not as consumers. Instead the community aspect of our farm lives here very strongly – almost everyone feels some ownership and willingness to share the risk of crop failures as well as the bounty that can allow them to process extra food for the winter.”

He concluded, “Our farmers have always felt that it is important that we have regarded our farm as a community and not as a business – we always try to aim at agriCULTURE rather than agriBUSINESS.”

To endure and perhaps thrive in our extreme era, CSA cannot be redefined to a competitive selling system dependent on “customers.” CSA was never intended for that purpose.

In a CSA working toward the principles embodied in the CSA Charter (as opposed to a customer-food subscription business) people are not “buying boxes of food.” The people who comprise the community (whether a city neighborhood, a town, a workplace or place of worship) are providing direct support to a whole farm or network of farms, and then partaking in a share of the harvest. This is a key distinction.

CSA embodies the potential for a new way of life upon the land for farm, farmers and supporting community. The economic impulses are associative, rather than competitive or exploitive, the impulses that have impelled industrial agriculture to become such a destructive force nationally and globally.

Some progress has been made in the direction of CSA as a new form of economics and relationship with the land, the farmers, and the people who as a community become part of a farm. Much more is possible. And I think much more is necessary.