As I think of it today, I am moved to post a link to Day 15 of the epic, non-fiction saga, Odyssey of the 8th Fire.

Odyssey of the 8th Fire is a an online journal I created in 2006 to tell the true story of a prayer walk for the Earth that lasted for eight months as a band of pilgrims walked from the Atlantic Ocean to the Pacific, listening all the way to the call of the  land, as well as the people, plants, and animals who live upon the land.

On Day 15 of this historic journey, the band of walkers arrived at United Nations (UN)  headquarters in New York City. While at the UN they remembered the explicit messages of the traditional elders of Turtle Island (North America), as they fulfilled one of the core traditions of the land they have responsibility to caretake. Because the elders words remain relevant and worthy of careful consideration, I am posting a link to that one, small but significant part of the great, long saga.

Traditional elders of the Four Directions meet with UN Secretary General Boutros Boutros Ghali in his office at the conclusion of the Cry of the Earth. Photo by Wanelle Fitch, 1993.

My friend Cindy Pickard has produced a beautiful film exploring these themes: The 8th Fire. I highly recommend her film.

My old friend and teacher, Grandfather William Commanda, Ojigkwnong, now age 95, will soon have another vital meeting with officials of the Canadian Government concerning his vision for Victoria Island (Asinabka).

Like the other key visions which have punctuated Grandfather’s life, the vision for an international healing center at Victoria Island has profound global importance.

Victoria Island is a jewel of nature, strategically located in the middle of the river that runs through downtown Ottawa, Canada’s capital city, under the shadow of Parliament Hill, where the government of Canada meets.  For countless centuries, Victoria Island was a traditional spiritual meeting ground for the Algonquin peoples.

Grandfather envisions returning the island to its spiritual purpose by establishing an inclusive City Park, a Historic Interpretative Site, and International Peace Center at the Sacred Site of Asinabka -Chaudière Falls. The center would host programs and processes for individual, group, and planetary healing, development and peace.

Grandfather Commanda is the senior Algonquin Elder in this territory. Since 1970, he has been the Keeper of three sacred wampum belts of spiritual and historic importance: the Seven Fires Prophecy Belt, the 1701 Friendship Belt and the Jay Treaty Border Crossing Belt.

I first met Grandfather in 1989 when I interviewed him for my book, Profiles in Wisdom: Native Elders Speak About the Earth. We then became closer friends in the mid-1990s as we participated in a prophetic and historic walk from the Atlantic Ocean to the Pacific – The Sunbow 5 Walk for the Earth (Odyssey of the 8th Fire).

Over the decades, Grandfather has earned wide international respect as a visionary and healer. Most recently – May, 2009 – he was honored by being invested as an Officer of the Order of Canada by the Governor General of Canada. The Order of Canada is the centerpiece of Canada’s honors system and recognizes a lifetime of outstanding achievement, dedication to the community and service to the nation.

Grandfather and his friends have been working for over ten years to develop the vision for Victoria Island, and now, in 2009, they feel the time is right to take another big step forward.

Many people and groups –  Algonquin and non-Algonquin, from Canada, the U.S.A. and a host of other nations — have written to the Canadian Prime Minister, and other government officials, seeking to have this vision realized. More letters and expressions of support are needed and welcome now.

Victoria Island served as an important sacred ceremonial place for the original peoples of the land. It seems the land has been waiting for the ancient communal fires to be re-kindled..

With Grandfather Commanda’s vision to build a peace and healing center, comes an opportunity to cleanse and reawaken the land, to ignite the fires for a circle of all nations, and to help spark a culture of peace. Meegwich. 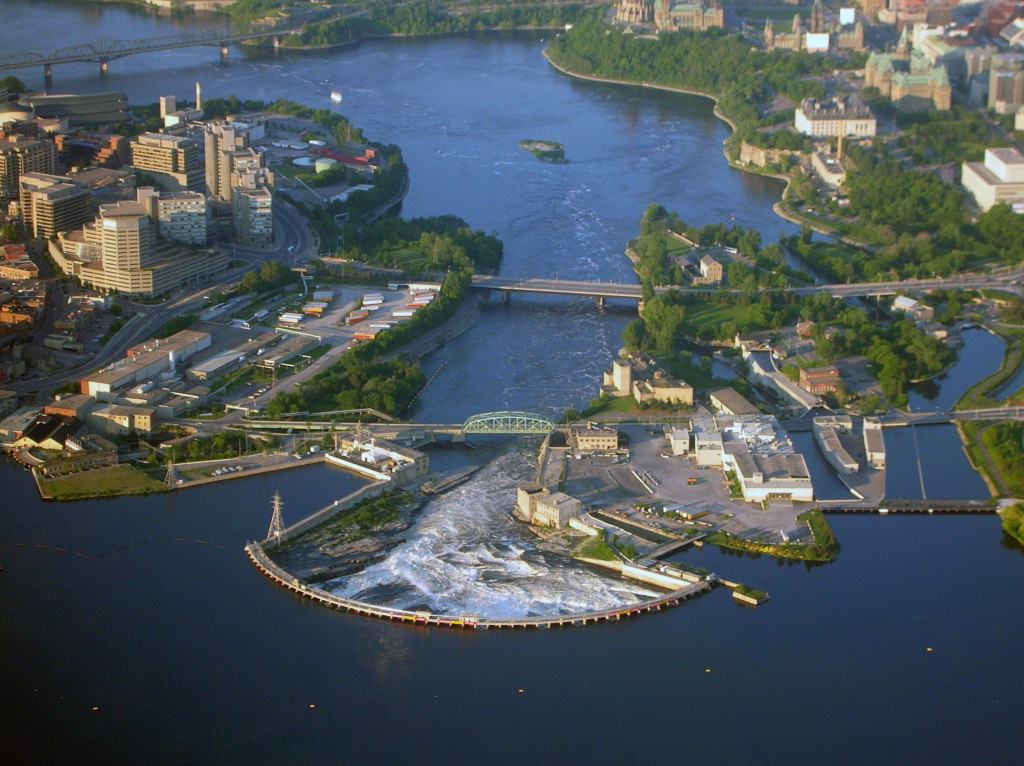 The sacred place of the vision: Chaudiere Falls between Ottawa and Hull in Canada.